“I Wonder What They Were Fussing About” 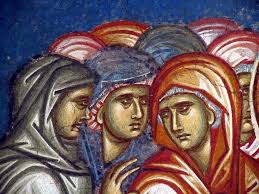 I wonder what they were fussing about.

Before I pondered the possibilities, I began wondering if that first sentence needed to end with a question mark. Come to think of it, same question regarding the one I just wrote.

I’d answer, no and no. Both of my questions are technically “indirect questions” which, punctuation-wise, are more akin to statements than to questions. No question marks.

As an English major, editor, and sometime copy-editor, I easily fall prey to “analysis paralysis.” Even before the question mark question, I was questioning my first sentence’s structure. You see, I ended it with a preposition, and that, you probably remember from a mouldy old English class, is a no-no, unless you know you’re doing so for a very good reason, so I gave the alternative a test drive.

I then went back to the original question, one in which the pronoun “they” languishes in desperate need of an antecedent. I hereby supply that need: Euodia and Syntyche. In “I wonder what they were fussing about,” “they” is them. And woe is me! If I keep playing this game, we’ll never get out of the grammatical quicksand.

Save me, please! Just give me your guess. What do you think was bugging Euodia and Syntyche?

First, do the names ring any bells? Hint: Those are two ladies whose names are immortalized by the Apostle Paul in the Bible, specifically in his “Letter to the Philippians.”

“I plead with Euodia and I plead with Syntyche to stop arguing with each other and agree in the Lord” (4:2).

A very little deduction (reading the surrounding verses, and maybe even all four chapters of the Bible book) will make a few things relatively clear.

The apostle writes the letter to folks with whom he had a heartwarming history and more-than-ordinary friendship.

Euodia and Syntyche were among those who had worked hard alongside Paul in helping further the good news of Christ.

The apostle is in prison (actually, house arrest in Rome), but in the midst of the mostly good news he’s had from Philippi is the bad news that these two valued Christian workers are in a fuss, and it’s become at least a hindrance and a nuisance, if not worse. Though each one surely thought she was right and the continued spread of the Christian faith was dependent upon everyone agreeing with her regarding the color of the carpet in the sanctuary, both were wrong in bowing to the temptation to fuss.

Okay, maybe it wasn’t decorating preferences, but here’s the point. Paul doesn’t tell us if either one was right, just that they were both wrong to fight. As all-consuming as they’d allowed their issue to become, all that we know now is that they fussed, and it’s easy to infer that the Apostle Paul thought their fuss was worse than dumb. In fact, he is forced to tell the two “fussers” to “get over it and get along,” and he enlists the aid of a mediator to drive the point home.

Sadly, Euodia and Syntyche, who had been among the apostle’s valued helpers, had become, as one preacher later christened them, Odious and Soon-touchy.

The scenario is as modern as tomorrow, and irony abounds.

The danger was that the division between the two could spread, and that had become an issue far more dangerous than their “presenting” issue. (Again, we don’t even know what it was.)

The two might not have been willing, at that moment, to drink coffee (or eucalyptus tea or whatever) at the same table, but the fuss coupled the “fussers” names firmly together forever.

Count on it. If we bow to the same temptation that nailed these two together, people will remember that we were “fussers” a lot longer than they’ll remember our fuss.

I hope they grew up and got over it. I’m confident that they were both better folks than their fight might indicate. However you wish to phrase it, the answer to my initial question regarding the topic of their fuss is that no one knows or cares. And that’s the point.

The real answer to their fuss, and any future fusses we might ourselves foment, comes a couple of chapters earlier in the amazing Chapter Two: “Your attitude should be the same as that of Christ Jesus who, being in very nature God, gave up his divine privileges, took the position of a servant,” and died for us “on a cross.”

Sometimes losing is the only way to win.

You’re invited to visit my website, and I hope you’ll take a look there at my new “Focus on Faith” Podcast. At the website, just click on “Podcast.” Blessings!

Copyright 2021 by Curtis K. Shelburne. Permission to copy without altering text or for monetary gain is hereby granted subject to inclusion of this copyright notice.